Tavin-EM tablets are a combination therapy for Human Immunodeficiency Virus (HIV) infection in adults. Tavin-EM tablets should be combined with other HIV medications that have a different mechanism of action to the ingredients in Tavin-EM (Tenofovir Disoproxil Fumarate/Emtricitabine). Tavin-EM can be used as first-line HIV therapy for new patients or by patients who have already received treatment with other medications for HIV.

Tavin-EM is packaged as a bottle of 30 tablets. Each tablet contains two active ingredients - 300mg of emtricitabine and 200mg of tenofovir disoproxil fumarate.

HIV impairs the immune system by attacking specific immune cells called CD4+ cells. These cells are responsible for fighting infection, and without them infections that would not normally be harmful can become life-threatening. AIDS (acquired immune deficiency syndrome) can result from too many CD4+ cells being destroyed.

Tavin-EM tablets works by preventing or slowing down the ability of HIV to replicate and spread. It does this by inhibiting the action of the viral-specific enzyme reverse transcriptase (RT), which is needed for the virus to be able to replicate. This keeps the amount virus down and has a subsequent increase in CD4 cell numbers, allowing the immune system to recover, and reduce the risk of disease progression.

Tavin-EM is a tablet. It should be swallowed whole with a glass of water.

It is important to take the prescribed dosage for as long as recommeneded by your doctor. Do not stop taking Tavin-EM unless advised to do so. This can cause increased HIV resistance.

What are the side effects of Tavin-EM (Tenofovir Disoproxil Fumarate/Emtricitabine)?

Possible side effects you may develop when taking Tavin-EM include:

Lactic acidiosis can occur in rare cases, and this is a serious side effect. It can cause pacreatitis, liver failure or kidney failure. 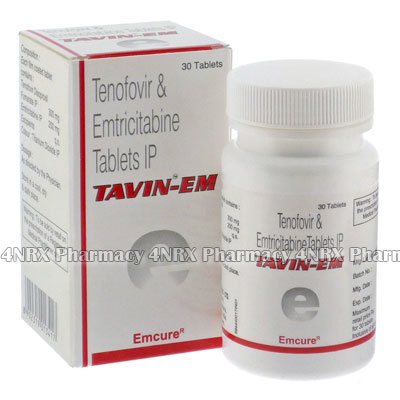